Join us for a tour of the newly expanded

The guided tour gets us up close and personal with all the technology that goes into the data center.

Yahoo! has built one of the world’s most energy-efficient, environmentally friendly and cost-effective data center buildings in Lockport, Niagara County, New York. Come join the ISA – Niagara Frontier Section for a guided tour of the Yahoo! Data Center. Get a bit of a preview at http://youtu.be/GGxlrNh6Zso

This best-in-class, energy-efficient design was recognized by the U.S. Department of Energy (DOE) in 2010. The Lockport data center will: 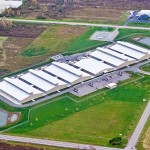 Yahoo!’s data center in Lockport, NY opened in 2010. The data center was the first implementation of a patented, energy efficient data center design called Yahoo! Computing Coop (YCC), aka Yahoo! Chicken Coop. The YCC design emulates the long narrow design of a chicken coop to re-circulate outside air. This arrangement, coupled with the temperate climate offered by Lockport, allows for the computers within to operate without having to be cooled by traditional air conditioning. The energy savings over traditional designs is substantial, and has led to global recognition from authorities such as the Uptime Institute and the U.S. Department of Energy.

Bookings are closed for this event.